The journey of a 60 X 5 ft. flower bed at the front of the church began last summer when a mass of dandelions invaded the premises. Father Larry sprayed the bed and it laid fallow over the winter and into the spring. It was not a pretty site and many questions arose as to what would become of this area. (Oh thee of little faith). 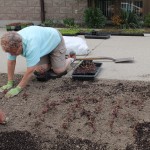 It was suggested a Pastoral Parish Council meeting that something special should be done for the 40th Anniversary. Something special, foreign to most people, was to make a carpet bed. This is a Victorian Gardening tradition using only foliage plants to make a design. The plant material used is a tropical foliage plant called Alternantera. The plants are all started from cuttings in a greenhouse during the winter months. 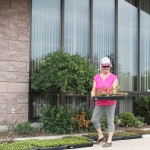 Plans began in the spring after extensive tilling and weeding in preparation for the planting. Help came from various people some from the church and from non church members. The first challenge was the design, then the incredibly hot sun and no rain, and the lack of plant material. All was solved with a watering hand from Father Larry, rain from the sky from another Father, an artist friend and the Kitchener Horticultural Society who supplied their left over plants.
It originally looked like organized chaos to most parishioners since they had no idea what was happening. It took a while to develop, but it gradually took shape and became an inspiring display of our parish logo. 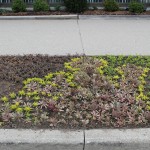 I would like to thank all who helped with the garden as well as the compliments from the fellow parishioners. 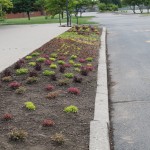 First Friday all day with Benediction at 9:00 pm

Saturday: 11:00 am – 12:00 pm
also available after weekday Holy Mass
when requested.
And during Friday’s Holy Hour when available.