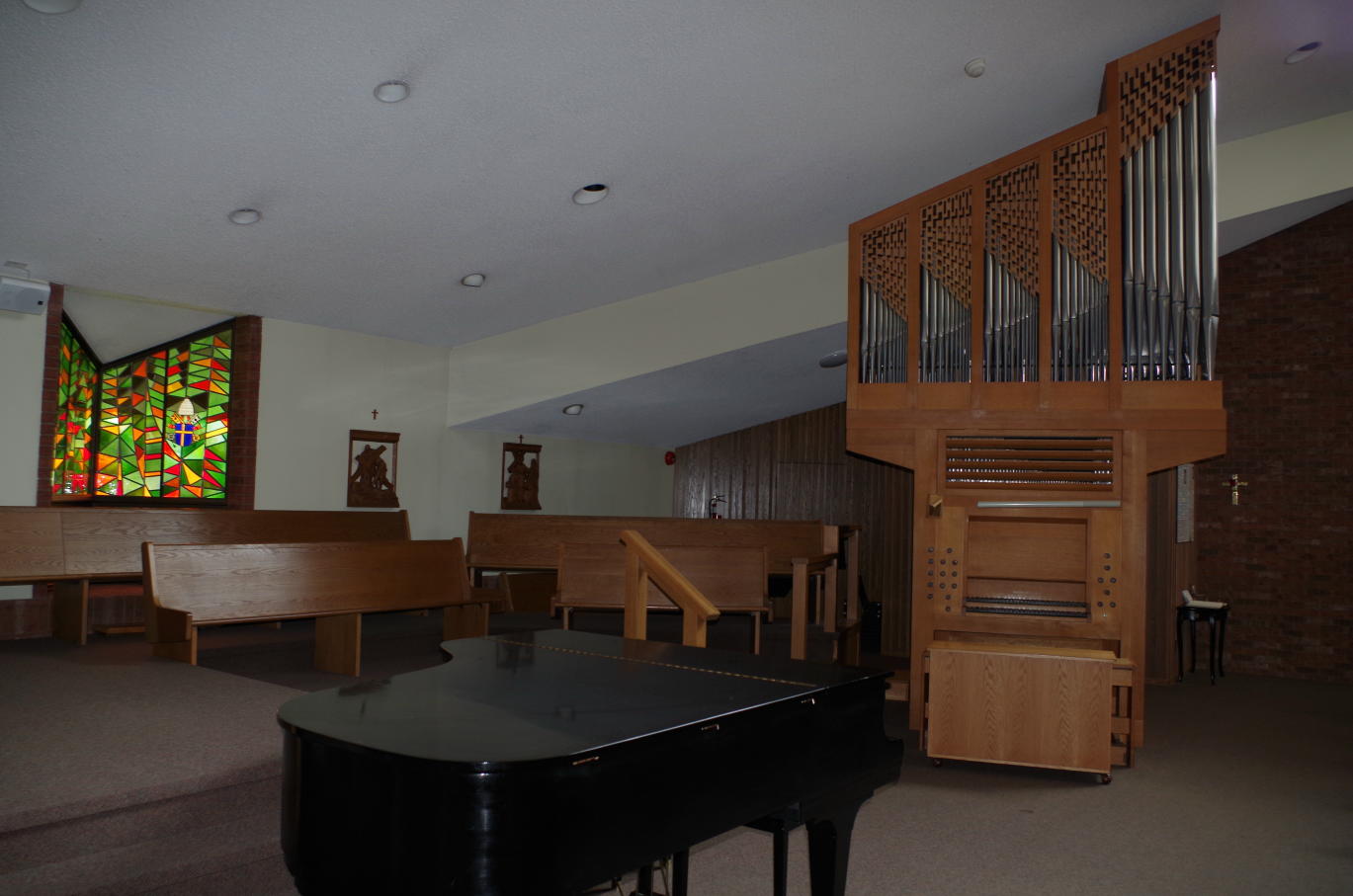 Most of the choirs at Blessed Sacrament are directed by David Hall, director of music for the parish. Each choir is organized around two weekly commitments: the time of the mass when it leads the music and the time of the practice. All groups use CBW3 as the hymnbook to lead congregational singing and any differences in the style and type of music from one choir to another is revealed in the music they sing before mass.

Information that applies to all choirs:

Choir members need to arrive 15-20 minutes early before mass to have a brief warm-up practice at that time. All choir members are given individual copies of the choir edition of the Catholic Book of Worship for their own use and must bring it with them every time. Other music is purchased as sheet music or octavos and kept in three ring black binders in the practice room. These binders are numbered with one member from each choir sharing a numbered binder with a person in another choir. Consequently the binders must be left at the church and may only be taken home for extra practice after checking with the director. Choir members are also asked to have a personal binder to hold other chants and photocopied materials which are distributed from time to time. All practices take place in the meeting room at the back of the church lobby area.

Information about the choir at each specific mass:

Those who lead the music Saturdays at the 7:00 pm mass practise directly before the mass beginning at 6:00. This group has a good level of expertise and music reading ability and make the most of the practice time. Once a month, generally the third weekend, the music at the Saturday evening mass is organized by Rick Guzik in a more contemporary folk group style, and the regular choir members have a weekend with no practice or singing obligations.

The choir for the 8:15am Mass has no scheduled practice beyond the warm-up on Sunday beginning at 8:00am.
The choir that sings at 10:00am Mass on Sundays and practices Thursdays from 7:30 to 9:00pm is a 5 part SSATB adult choir of approximately 15 members.

The group that sings Sundays at 11:45 Mass practices Wednesday evenings 7:30 – 9:00pm. This is the group that practices with instrumental accompanists, currently guitar, bass, recorder and clarinet.

Those people who are available during weekdays and have volunteered their names for this purpose sing also in the Funeral Choir. They are contacted by phone a day or two before each funeral and come along if they are able. We meet 20 minutes before hand to look over the music but otherwise there are no practices. This is a valuable ministry of comfort and support in our parish. Members can be called upon approximately 20 times a year. We also sing at the 9:00 am mass on All Souls Day (Nov 2) if it falls on a weekday.

Younger musicians are accommodated at their own practices. Children in Grades 3 – 12 practice from 4:00-5:00 pm on Tuesdays under the direction of Shannon Smith. They are provided with a congregational (melody only) edition of CBW3 but do expand into bass, alto and descant parts. We learn anthems and choir pieces which we sing at the Sunday 11:45 mass once a month, normally on the last Sunday. Over the Christmas holiday we also sing for the mass at the Winston Park Village Home on the last Tuesday of December. And on Easter Sunday we lead music at the extra masse held in the Parish Centre.

Baptism liturgies take place twice a month on Sunday afternoons and include full musical expression using psalms, Taize pieces and regular sung responses. Since this group sings the same music each time it is easier to participate in on an occasional basis than other groups and does not have rehearsals separate from the actual liturgies. Carolyn Snyder Milke serves as the piano accompanist.

All four weekend liturgies are complete with a musical setting of the responsorial psalm led by a cantor. Those who serve as cantors are volunteers drawn from all ages. They do not necessarily sing in a choir and we welcome expressions of interest from those interested in this ministry alone.

The following information is of interest to new cantors:
Recordings of the psalm and gospel acclamation are available two or three weeks before hand to help you prepare.
Besides singing you introduce the celebration and announce the hymns. The page with this material is available by Friday afternoons only.
The responsorial psalm should be done at the main ambo. The gospel acclamation is done at the lower music leading stand.
Occasionally cantor leadership is required for other liturgical items such as the Kyrie (Lord, have mercy) or the Lamb of God.
Microphones are on when the switch is up or forward towards your end of the microphone and off when the switch is down or away from you.

This heading has further information about music and activities at Christmas masses, Holy Week, Confirmations and other similar special occasions.

Church musicians find themselves especially busy at particular times of the year and it helps to know ahead the extent of the commitment. Music at Christmas masses includes substantial singing before mass and is provided for by each choir. The Juniors sing at 5:pm Christmas Eve, Rick and David combine their groups at 8:00pm, and members of the other choirs directed by David Hall sing at Midnight Mass. On Christmas Day the 9:00 and 11:00am masses are served by members of the adult choirs willing to return. The Christmas Gospel is presented in pageant form with children of the parish before the 5pm mass on Christmas Eve also. This creates a conflict for members of the Junior Choir who wish to participate in the pageant because they cannot do that and sing with the choir. Please talk with the choir director if you are considering this.

In Holy Week the choirs combine to sing the liturgies of Holy Thursday and the Easter Vigil. On Good Friday there are two identical liturgies at 11:30am and 3pm and choir members attend according to their convenience.

Finally, choir members are asked to assist at one or more of the Confirmation services which are generally arranged for a weekend in the spring. There are three services, and people may help according to their connections with a school or according to the convenience of the service times for their own schedules.

Masses on Nov 2, All Soul’s Day, Jan 1, Solemnity of Mary, Mother of God, Ash Wednesday and First Communions for the four Kitchener schools are planned for organist and cantor leadership. Choir members attend as their schedules allow.

Some events are unique. For the sake of example I’ll mention activities such as our 2002 anniversary recording Gathered As One, (which is still available for purchase), the musical pilgrimage to Venice in July 2004 when we sang at Basilica San Marco and years when we have marked Blessed Sacrament Sunday with an afternoon Evening Prayer and musical program. In 2010 our seminarian led a Lessons and Carols service that included several selections from Handel’s Messiah. We regularly receive invitations to join with other church choirs in town who are sponsoring celebrations and programs. Every year in October there are choral workshops available for choir members to attend, one in Kitchener (Sing Fires of Justice) sponsored by Laurier University and one sponsored by the diocese. A diocesan musicians retreat is held in the spring.

Instruments join with the grand piano and organ to accompany and support the singing, except on Good Friday when the a capella tradition prevails. Solo instrumental music is also used regularly to supplement our rites, except in Lent when we exert an older discipline and forgo all instrumental music except to accompany singing. We presently have regular participation from 3 guitars, bass guitar, violin, flute, clarinet, recorder and upon occasion handdrums and brass.

The organ in our church is a work of art in and of itself with both various recordings and a book detailing its features. It is a tracker action organ by Gerhard Brunzema built in two stages in 1983 and 1991. It is dedicated in memory of MaryAnne Voisin who was organist when it was commissioned but died in 1982 as it was being built. One of its features is a tuning system which slightly favours those keys most used in Baroque and early music (pre 1750). Details are available from the director of music for those instrumentalists that might notice that some notes are hard to tune when the organ is playing. It even has its own website sponsored by the University of Quebec which is linked from our website. here.

Blessed Sacrament Parish has a full time Director of Music who is responsible for the music at all masses. The current director is Mr David Hall who can be reached at the church through the church office (519 742-5061 or music@blessed-sacrament.ca ) or at home at 519 741-0067. He has degrees in organ and church music from Wilfrid Laurier University and the Royal Canadian College of Organists. He also has a Masters of Arts degree in Religion with a concentration in liturgics from Yale Institute of Sacred Music. Before coming to Blessed Sacrament in 1997 he lived and worked in Gander Nfld at the Anglican Cathedral there. He is married to Lilla Hall who is the director of music at Trillium Lutheran Church, 22 Willow St, Waterloo. He has three grown children: Katharine, Timothy and Dorothy.
Further to his work at mass and with the choirs David also assists school choirs, First Communion classes and Confirmation classes at the four parish schools to prepare music for their liturgies. He has also taught private organ, and music theory lessons and accompanied choirs at Wilfrid Laurier University and at the Lutheran Seminary Chapel from 1999-2012. He has served as a regional director for the Royal Canadian College of Organists, and as president of the local centre of the RCCO and accepts occasional recital engagements. He has made a recording of solo organ music by Bach and has been part of several other discs such as Evening and Morning and Pie Jesu on the Chestnut Hall label. www.chestnuthallmusic.com

Shannon Smith’s work has been partly described above under the heading of Junior Choir and Instruments. She had been part of music ministry here as a volunteer before she retired from a music teaching position at WCDSB in 2014 and began working part-time for the parish. She sings, plays the clarinet or accompanies on piano and guitar for school masses sometimes to the extent of rehearsing and directing a school choir.
Joann Koehler was Junior Choir director before Shannon and continues to volunteer as a flute player and choir member for funerals, CWL functions and monthly masses at Winston Park Village and Chartwell Westmount.
Volunteer Rick Guzik co-ordinates a guitar based group that leads the music on the third Saturday of the month.